President Muhammadu Buhari, on Monday, promised to adopt sound security and economic transformation programmes to address the nagging social and economic challenges facing the country, if re-elected on February 16.
Buhari, who spoke in Hausa language at the inauguration of his re-election campaign in Maiduguri, Borno State, also promised to take the fight against corruption to a logical conclusion.

He said his administration had achieved significant progress in the campaign against corruption, economic diversification and improvement of security.
The President said his administration had adopted practical measures to reduce poverty, provide employment opportunities to the teeming unemployed youths and enhance farmers’ access to fertiliser and inputs.
“In 2015; I promised three things namely: security, economy and corruption.

“We reinvigorated agricultural sector; provide fertiliser and other support to farmers. I am happy that we recorded bumper harvest in the past two seasons.
“The high yields recorded boost crop production and we no longer spend money on the importation of rice.
“On security, our achievements are glaring and I remain committed to the protection of lives and property of the people as well as safeguard the nation’s territorial integrity.
“I always sleep with you in mind on security, economy and fight against corruption,” Buhari said.

The President also said that his administration would auction houses and other property seized from corrupt officials and transfer the funds to national treasury for execution of viable projects.

He called on the electorate to vote for APC and all its candidates to enable them continue with their policies and programmes.

Buhari further sympathised with party supporters who sustained injuries in the collapse of a pavilion at the venue of the rally.

Governor Kashim Shettima, in his speech, commended Buhari for the successes recorded in the fight against Boko Haram insurgency, and effective response to address the humanitarian crisis in the state.

Shettima said the President had demonstrated love and concern to plight of the people of the state, which assisted to address social, economic and security challenges bedeviling the state.
He assured Buhari of support of the people in the state, adding voters in the would give the president about 95 per cent block votes.
“To reciprocate your love, goodwill and what the you did to us, we shall give 2.3 million votes,” he said. 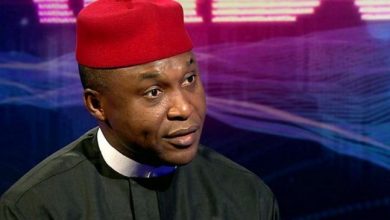