The trial judge absolved the defendants of all the 22 counts charges brought against them by the Economic and Financial Crimes Commission (EFCC) for allegedly diverting company funds through the Sales Commission.

The defendants were arraigned on 22 amended counts, bordering on alleged conspiracy, stealing, dishonest conversion of funds for purpose of purchasing properties and converting funds belongs to the firm.

Their alleged offence is contrary to and punishable under Section 287(8),332(3) of the Criminal Law of Lagos State 2015.

The EFCC had alleged that the defendants had been appropriating some money to themselves illegally in the guise of the sales commission.

Following their plea of not guilty to the charge,  the  prosecution team led by Mr. Rotimi Jacobs (SAN) opened their case, called eight witnesses and tendered several documents as exhibits before they closed their case.

During pendency of the trial, prosecution witness narrated to the court the process of sales in the investment arm of AIICO.

The Prosecutor Witness 1 (PW1 – Eguarekhide Longe) had told the court that he was working with AIICO Pension as well as a Director of AIICO Capital Limited.

He said the company sells insurance contracts and gets money and invests.

According to him, the  Insurance group deploys a broad agency network to sell insurance contracts and for agency work done, the sales commission is paid to the agent.

Longe told the court that the sales commission is usually approved by the board and that the Managing Director cannot sign more than N5million.

After the close of the prosecution case, the defendants through their counsel, Mr. Tayo Oyetibo (SAN), Adeyinka Olumide-Fusika (SAN), and Dr. Muiz Banire (SAN) for first to third defendants respectively, filed a no case submission which was vehemently argued before the court.

The defence counsel submitted and drew the court’s attention to the  evidence of PW1 during cross examination, who agreed that the sales commission paid in 2020 to prove the exact amount allegedly stolen by the defendant to establish a prima facie case.

They also urged the court to consider evidence of PW6(Mr Bukola Oluwadiya – a Director of the Company), PW8 as well as the exhibits P to see that defendants never stole or converted money belonging to the company but was entitled to the sales commission.

They said, none of the prosecution witnesses testified as to rule ‘ prohibiting payment of sales commission to staff.’

However, while ruling on their no case submission, Justice Taiwo held that the prosecution failed to prove the alleged offence against the defendants.

The court said that the prosecution witness, an investigator with the EFCC (Mr Nuru Alibaku PW8) during cross examination, said he never came across any document showing that defendants and former Managing Director of the company  Lanre Fabunmi met and carried out any illegal act.

The EFCC investigator further stated that the EFCC did not reach the conclusion that the Defendants stole from AIICO Capital Limited.

The court held that no such conspiracy was proved either by direct or circumstantial evidence.

The court held that the Prosecution fas failed to prove that funds belonging to AIICO Capital Limited were dishonestly converted by the Defendants.

She made reference to evidence of a second prosecution witness (Mr Mayowa Ogunsola – PW2) that before any payment is made, it must go through its internal control, client service, and the Managing Director approves.

The  court held that none of the defendants have shown to be part of Internal control or hatching a plan to steal from the company with the erstwhile managing director.

She also stated that, under cross examination, PW2 admitted that he was amongst the 38 persons who were paid sales commission by the Company. She

She said believing the evidence of the prosecution that they (defendants) got  huge sums as sales commission means they connived with the erstwhile managing director would be speculation on the part of the court.

The judge said lack of concrete evidence creates doubt in the mind of the court. After the judge cited a plethora of decided cases, she held that the court does not act on speculations, let alone conjectures that are ambiguously speculative.

On the established trite legal principle, that suspicion no matter how grave is not evidence and cannot be the basis for conviction of any person in law.

Suspicion remains suspicion and cannot graduate to convincing evidence no matter how grave the suspicion can be.

The trial judge said the prosecution is expected to prove that indeed there was a meeting of minds between the defendants and erstwhile MD, Lanre Fabunmi to commit the offence.

” In final analysis, the case of the prosecution is riddled with speculations, half truths and insufficient evidence to support the amended information.

“The case of the prosecution was thoroughly whittled down under cross examination and the remnants of the evidence have not established a case against the defendants warranting the need for them to enter their evidence.

“Consequently, having failed to establish a prima facie case against the defendants, the no case submission made by the defendants is hereby upheld. The defendants are hereby discharged and acquitted”, the Court ruled on Monday September 19, 2022. 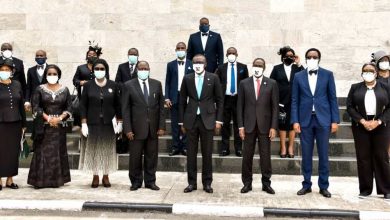