Oil prices headed higher on Friday for the fifth day in a row as fears related to U.S.-China trade talks subsided and production cuts continued to make headlines. 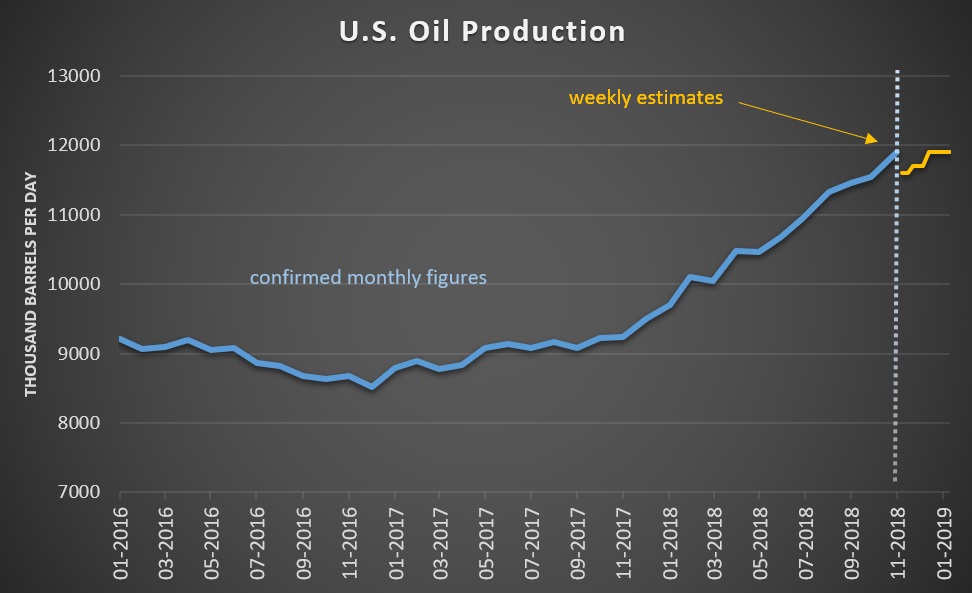 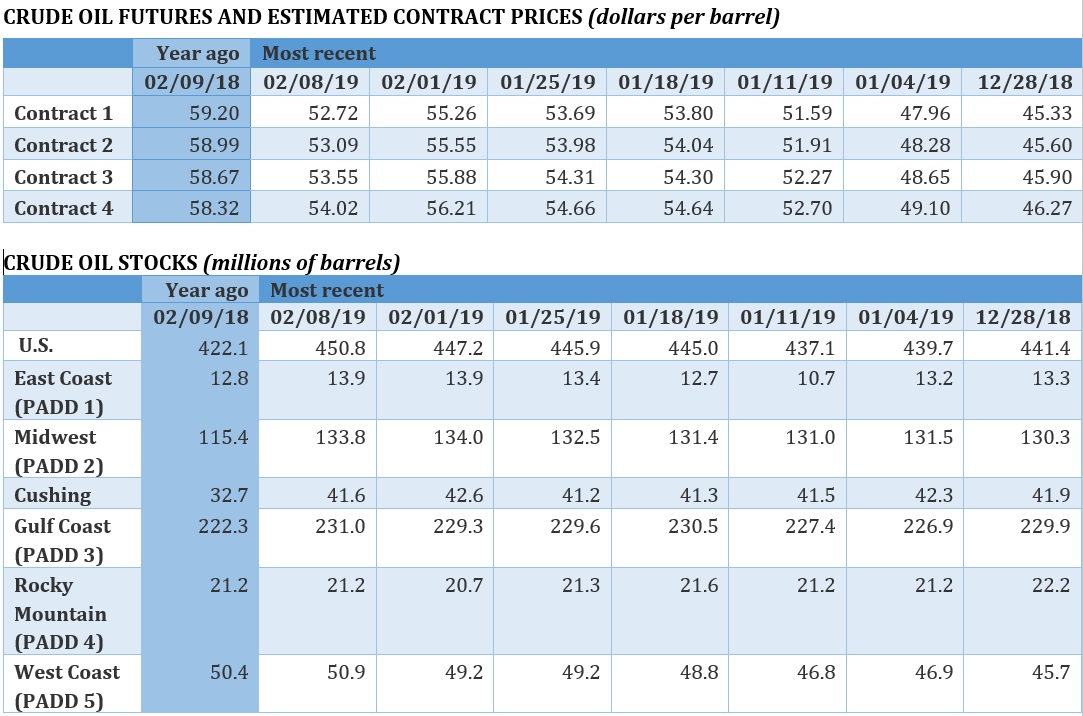 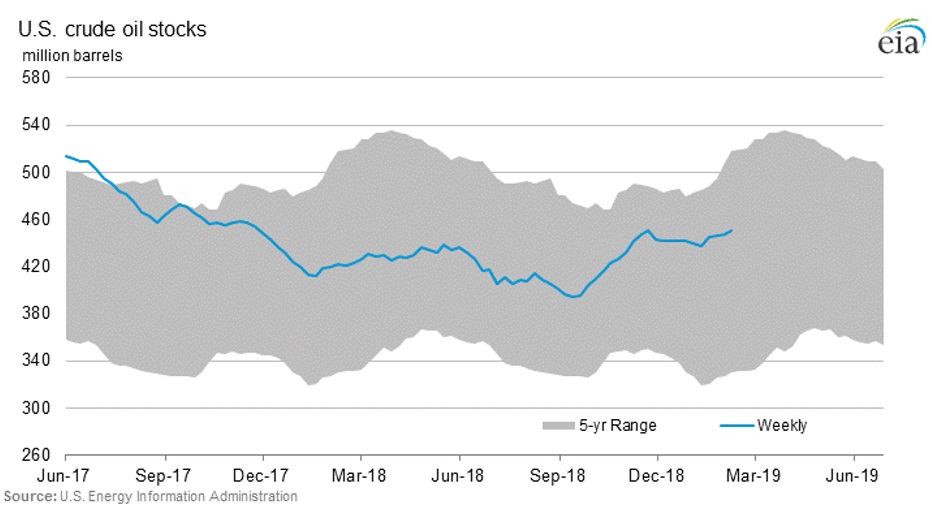 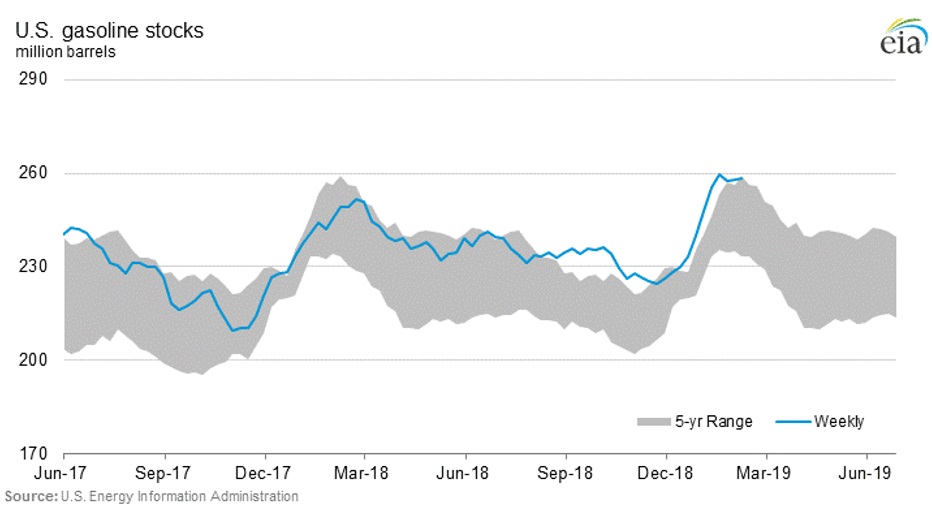 Oil posted sizable gains this week, with ongoing outages in Venezuela tightening the market. Also, one of the largest bearish factors for oil – the U.S.-China trade war – showed some signs of easing.

OPEC cut output…and demand forecast. OPEC cut productionby 800,000 bpd in January, going a long way to erasing the supply surplus. However, the group also cut the demand estimate for its crude by 240,000 bpd from the last forecast due to a slowing economy. The group is still producing a bit more than what they think is needed. Saudi Arabia already indicated that it would shoulder an additional 0.5 mb/d reduction by March.

IEA warns on quality differences. The IEA said in its latest Oil Market Report that the dwindling supplies of medium and heavy barrels, at a time when light sweet oil is surging from U.S. shale, has disrupted both the crude and product markets. Medium and heavy losses from Iran, Venezuela, Mexico and limited midstream capacity restraining growth in Canada has all combined to put a premium on those barrels. As a result, refiners could face some challenges this year as they search for the right type of crude for their facilities.

U.S.-China trade talks make progress. A week of trade talks in Beijing between the U.S. and China ended with both sides indicating that significant progress was made. The talks will continue next week in Washington. It seems unlikely that a comprehensive agreement will be secured before the March 1 deadline, but the WSJ reports that they could agree to a memorandum of understanding outlining a framework trade deal, allowing talks to continue beyond the deadline. President Trump also indicated he would be willing to punt on tariffs if the two sides were making progress.

U.S. bans MTBE shipments to Venezuela. The U.S. has bannedMTBE from entering Venezuela, a fuel additive in gasoline. The sanctions could make the gasoline shortage much worse.

Gauidó names a new Citgo board. Venezuela’s opposition named a new temporary board of directors to Citgo this week, a move intended to seize control of the U.S.-based subsidiary of PDVSA.

China negotiates with Venezuela’s opposition. China has loaned more than $50 billion to Venezuela over the last decade, and has begun talks with Venezuela’s opposition, fearing that it could see its position cut off with a change of government. Venezuela still owes China more than $20 billion, to be paid back with crude oil shipments. “China recognizes the increasing risk of a regime change and does not want to be on the bad side of a new regime,” R. Evan Ellis, a China expert at the U.S. Army War College, told the WSJ. “While they prefer stability, they realize they have to put eggs in the other basket.”

U.S. leverage over Iran wanes due to Venezuela. The U.S. is likely to allow some degree of oil purchases from Iran beyond the May deadline, a growing number of experts believe. The catastrophic losses of oil supply in Venezuela, and the failure to secure rapid regime change, will make it difficult for the U.S. to take Iran’s oil exports down to zero without causing an oil price spike. Venezuela sanctions and tighter heavy crude oil market would lead to another round of…U.S. waivers on Iran oil export sanctions,” Sara Vakhshouri, president of Washington-based SVB Energy International, told the WSJ.

U.S. and German tensions ease. Germany agreed to help finance an LNG import terminal that would receive gas shipments from the United States, and in return, the Trump administration will pullback from its effort to try to kill the Nord Stream 2 pipeline. The handshake agreement eased tensions between the two countries. U.S.-German relations have taken a turn for the worse under the Trump presidency, with high-profile fights over the Iran nuclear deal, the Paris Climate agreement, steel tariffs, NATO and the Nord Stream 2 pipeline, among other issues.

EU convenes summit on alternative to dollar. The European Union held a summit to promote the euro in an effort to break dollar dominance, according to Reuters. The meeting included top European oil and gas companies, utilities, and other industrial giants. The EU has long paid lip service to its preference for alternatives to the dollar, but the souring ties between the EU and the Trump administration has accelerated those efforts. “Washington doesn’t like cartels like OPEC,” one participant told Reuters. “But then how can you have one market dominated by one currency – the dollar.”

Energy companies perform better without growth metrics. Oil and gas companies have long tied production growth or reserve replacement growth to CEO pay. A new report finds that companies that separate executive pay from growth metrics perform better. This comes at a time when shareholders are increasingly pressuring the oil and gas industry to focus more on profits rather than growth. Moreover, the prospect of peak demand calls into question aggressive spending on long-lived assets.

Chevron bets on shale. In an interview with Bloomberg, Chevron’s (NYSE: CVX) CEO Mike Wirth laid out a vision of belt-tightening and lower spending, with an overwhelming focus on shale, particularly in the Permian. Gone are the days when Chevron threw down billions of dollars on a single project. Chevron’s spending is about half of what it was in 2014. 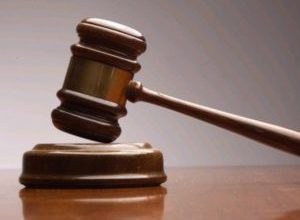 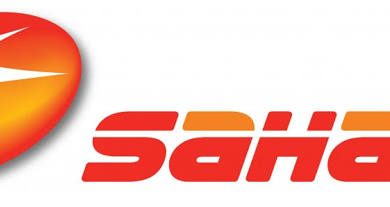