Nigeria’s Senate President, Dr. Abubakar Bukola Saraki has reacted to the judgement of the Supreme Court which upheld the earlier decision of the Code of Conduct Tribunal discharging and acquitting him of all 16 charges instituted against him while reiterating his confidence in the judicial process and the ability of the Judiciary to do justice to all manner of men and in all circumstances.

Similarly, Kwara State Governor, Dr Abdulfatah Ahmed, has hailed the Supreme Court verdict on Saraki’s assets declaration and sundry charges instituted against him before the Code of Conduct Tribunal.

Saraki said, “At the end of a tortuous journey of 1018 Days counting from September 22, 2015 when the case began at the Tribunal, I am happy that I have been vindicated. The Supreme Court has affirmed that there is no evidence of false declaration of assets. The court also observed that certain agents took over the responsibility of the Code of Conduct Bureau in this trial, and one can infer that this was done towards a pre-determined end.

“This outcome has gladdened my heart and further strengthened my belief in this country and as well as my faith in Almighty Allah, who is the righter of all wrongs. God has vindicated me today before the judgement of man, and I am most thankful and humbled at His grace and infinite mercies.

“Through it all, I refused to be shaken, knowing, as Dr. Martin Luther King Jr. said, that the arch of the moral universe may be long, but it bends towards justice. I knew the day would come when justice would prevail and I would be exonerated.

“I have always believed in the infallibility of our Judiciary, secure in the knowledge that our courts – the last refuge of the oppressed – would never condemn the innocent. This outcome is also a vindication of my belief in the rule of law.

“As I said in my first appearance at the CCT, this is a politically motivated case. The case was trumped up in the first instance because of my emergence as the President of the Senate against the wishes of certain forces. Ordinarily, I doubt anyone would be interested in the asset declaration form I filled over 15 years ago.

“What we have seen is the opposite. Instead of working together in the interest of the nation and to seek to do better for our people, we are fighting one another and using legal instruments to mount baseless accusations against one another. Instead of exhibiting the need for unity and working day and night for that purpose, we are stoking the fire of division and rancour. I maintain that, above all else, my CCT trial has been a flagrant vilification of my person, and shows that some people are after their personal interests rather than the national interest.

“As a result of the war of attrition, various arms of government have wasted resources needlessly. It has been three wasted years across board in this country. Three years that would have been devoted to tackling issues affecting Nigerians, including: economic recovery, insecurity, youth unemployment and strengthening national institutions – were wasted on malicious prosecution. People were ready to trade off three years that would have been devoted to fostering cooperation, unity and economic progress for their selfish ends. It is my hope that those who are behind my persecution will see the handwriting on the wall and leave me to do the work for which I was elected, so I can continue to give my all to this great country of ours.

“As many have rightly observed, it is plain to see that the anti-corruption fight is being prosecuted with vindictiveness, to target perceived political opponents. I believe in the need to fight corruption, but I will never be party to the selective application of the law or the rhetoric of an insincere anti-corruption fight.

“I believe in fighting corruption and I have made my own humble contributions to the fight against corruption in this country. As a presidential aide, I initiated the process that led to the enactment of the Fiscal Responsibility Act. I was the first governor to establish the Price Intelligence Unit which later metamorphosed into the Bureau of Public Procurement (BPP) at the federal level. In the history of this country, the highest fraud, the most brazen corruption has been the Fuel Subsidy scam. No one wanted to talk about it or confront entrenched powers. As a Senator on the platform of the ruling party at that time, I sponsored a motion on the floor of the Senate calling for investigation that led to the unprecedented exposure of the massive corruption in the fuel subsidy regime. That was my only point of departure with the former President. My antecedents speak for themselves.

“I thank Nigerians for standing by me through the difficult period of this trial. The support of ordinary Nigerians and their faith in me, as well as their sophistication and discernment in seeing this case for what it was, has been a source of strength to me.

“I am most grateful for the support of my Distinguished Colleagues and the Honourable Members of the 8th National Assembly for their unflinching support and regular attendance at the various proceedings. They were unfairly criticised for accompanying me on court appearances, but it is now clear that they did so because they believed that injustice to one, is injustice to all. They have been the true embodiment of esprit de corps. I thank them for banding together in the face of an unconscionable attack on the institution of the legislature.

“I thank my legal team for their determined and principled stance, and for their knowledge and diligence, which saw this case to its just conclusion. My gratitude to all my friends, political associates, supporters and the good people of Kwara State – all of whom have been solidly behind me.

“I thank my family for enduring this trial with their usual grace and fortitude. My immense gratitude also goes to the international community for their interest in this case. The Nigerian press have kept watch and I appreciate their vigilance in ensuring that all the facts were held up to scrutiny.

“To my supporters, yes, there is a reason to rejoice, but our celebration must be tempered with the sobering lessons of the attempted injustice from Day One of this trial. We all have to canvas for fairness in the fight against corruption. We should see this verdict as an inspiration to champion the rule of law, promote democracy and its institutions as well as tolerance of divergent views.

“The overwhelming support of so many, and the insistence on ensuring that due process and truth prevailed, has made this verdict possible,” he stated.

The Governor, in a statement by his Chief Press Secretary, Abdulwahab Oba described the apex court as the bastion of democracy in the country.

According to the governor, “the apex court’s judgment has reinforced the belief that the judiciary remains the hope of the common man”.

“What the Judgment has done is to re-energize the common man’s hope and belief in the judiciary. It is only hope for a better and free Nigeria”, the governor said.

Gov Ahmed explained further that the judgement had vindicated the Senate President as a trustworthy and patriotic Nigerian that would do everything necessary to carry the country to an enviable height.

He recalled that till the trial lasted, Dr Saraki was unperturbed, unshaken and remained committed to providing purposeful leadership as the Chairman of the National Assembly, praising him for weathering the storm of legal battle for the last three years.

“The judgement is a watershed in political journey of the President of the Senate, Federal Republic of Nigeria and will lay to rest his political persecution”.

The Governor congratulated the Senate President for the victory and urged him to continue to work to strengthen the country’s legal process as well as democratic norms. 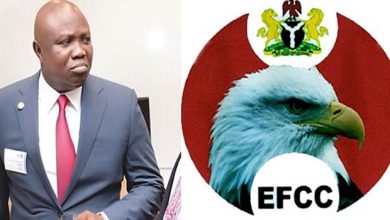 EFCC Raid : Ambode Says No Cause For Alarm