BY OUR REPORTER—–“Truth is incontrovertible. Panic may resent it, ignorance may deride it, malice may distort it, but there it is” – Winston Churchill
Several months after the suspension of the former Director General of the Securities and Exchange Commission (SEC), Mallam Mounir Gwarzo, from office over allegations of abuse of office and sundry matters have been in the public domain, it is nauseating that scores of supposed opinion writers have continued to inundate the public with well-crafted but logically insipid reasons why the decisions to make him step aside should not hold.
A particularly disgusting trend in the opinion articles is that rather than critically appraise the circumstances that led to the suspension of the former SEC boss from a dispassionate analytical prism, most of the writers have consistently taken position against the government, vilified the minister of finance, accuse the new management of complicity and others who, in their views, supported the decision, all in their desperate efforts to dress the ‘accused’ in a saintly garb of a ‘faithful’ servant.
But then, the question that ordinarily should have pre-occupied the thoughts of those behind the sporadic media campaigns, which some analysts have tagged ‘sponsored copies in the guise of opinion articles’ is: did the suspended SEC boss really breach any extant law, public service rules or corporate governance principles while discharging his roles as the Director General of the commission?
Again, one is at a loss as to why these strong advocates of ‘restore Gwarzo back’ have not really touched on some fundamental issues relating to his suspension but have rather chosen to engage in fractious and misguided arguments and by so doing, gathered under whimsical and quirky canopy of self-delusion in their hope that emotions will sway support for their agenda.
One thinks that the issues that should be of public interest in the lingering Gwarzo saga and which some of his defenders should write on or speak about should include, whether or not the suspended SEC chief has continued to be allowed to defend himself in a free and fair manner concerning allegations levelled against him by the minister, the EFCC and lately the Independent Corrupt Practices and related offences Commission (ICPC).
Also crucial to the current discourse on the ‘trials of Brother of Gwarzo’ are issues relating to his roles in contracts awarded to some companies during his tenure, some of which he allegedly owns shares in or in which his wife is believed to have interests. Is it true, as alleged, that the suspended SEC boss abused his office and violated the provisions of Sections 57 (12) (b) and 58 (5) of the Public Procurement Act, 2007 in the awards of contracts during his tenure?
The Federal Government’s Administrative Panel of Inquiry, last December, recommended Gwarzo’s dismissal, as Director-General of the Securities and Exchange Commission (SEC), from the Public Service.
This, it said is in line with “PSR 030402 (in relation to the allegation on Golden Handshake), having breached paragraphs 313 and 316(4) of the Financial Regulations (Government Notice No. 219 of 27th October, 2009)(engaging in extra budgetary expenditure without appropriate approval).”

Among others, Administrative Panel of Inquiry (API) set up by the Minister of Finance recommended that Gwarzo be referred to the ICPC for further investigation of the allegation of abusing his office to award contracts to Outbound Investments Limited, contrary to the provisions of Sections 57 (12) (b) and 58 (5) of the Public Procurement Act, 2007.

The report said to have been submitted to Mrs. Adeosun, directed, among others, that Gwarzo should refund the sum of N104,851,154.94, being the severance package he illegally approved for himself and received.

The Panel advised the Federal Government to re-orientate public servants to the very fact that the Public Service Rules and Financial Regulations are ground norms of every Government Service Contract, be it at the Federal, State or Local Government levels.
It added, “Accordingly, all Government Extra-Ministerial Departments and Agencies should be made to understand that the PSR and FR are superior to whatever specific legislations and domestic arrangements that guide their operations, except when such issues were not covered by any provision of the PSR.”

Another point that one feels these ‘defence’ opinion writers should have addressed in their vitriolic attacks on the minister and lately the new management of the commission is, should the operations of the Commission be totally grounded just because a top official is being asked to account for some aspects of his conduct considered not in tandem with corporate governance rules?
While some of the commentators have consistently argued that the conducted inquiries into Gwarzo’s roles as the ‘chief accounting officer’ in SEC bother on persecution of an innocent person, the reports and recommendations of the Administrative Panel of Inquiry set up by the minister had been published and supported with what could termed incontrovertible facts as to why such recommendations were made. Haba! What is this whole hues and cries about ‘Gwarzo must stay’ media campaigns all about?
It is also amusing that some of the ‘analysts’ are calling on the Minister of Finance to make public the report of the forensic audit of Oando Plc, the most complex issue in the lingering investigations, when as it were today the audit exercise is being undertaken by a globally renowned audit firm. The question again here is how can the minister make public the report of an exercise that is yet to be concluded?
While one would not want to be seen as taking sides on the pesky Gwarzo saga, it is only reasonable to suggest that these distractive opinion article specialists should allow the current investigations and cases before the courts to go on full course such that at the end of it all, justice will be done.
Interestingly, Mallam Gwarzo has continued to pursue his case in the court of law in demonstration of his faith in the judiciary that in the long run, justice will prevail. This is commendable on his part and therefore all those claiming to know him and trust in his sense of responsibility and moral uprightness should support the course he has chosen to pursue. To continue to adopt a kamikaze style in prosecuting a legal issue is not the best option in the present matter.
For now, it is also logical to say that rather than distracting the new management with frivolous insinuations and by desperately distorting the facts and deforming the issues, those at the forefront of the ‘Gwarzo must stay’ media campaigns should allow the new team to concentrate on its assignments.
What the public would want to see in the current efforts of the government to improve corporate governance in SEC under the latest team is people giving sound advice and remedial suggestions to help the team achieve its mandate. We have had enough of patently biased comments and opinions on the SEC matters that common sense demands that efforts should now be channelled more in making the commission stronger, better managed and more responsive to capital market investors’ needs.
This point was corroborated by the Chairman, House Committee on Capital Market and other Institutions, Hon. Yusuf Tajudeen, in his opening remarks when the Finance Minister and Mallam Gwarzo appeared before the committee recently to state their cases, that the lingering risks if left unchecked may impact negatively on the capital market.
It is also important that the ongoing forensic audit of Oando Plc, which is the genesis of the whole brouhaha, should be feature more often in public discourse with a view to ensuring that the final report on the exercise is made public whenever it is ready.
Quite interestingly, one would like to state unequivocally that the best of options for Mallam Gwarzo to seek redress in the face of alleged ‘persecution’ is the path he has elected to tread and everyone that believes in truth should allow him to explore all legally accepted avenues to get justice.
On a final note on this matter, I agree with St Augustine of Hippo’s timeless saying that “remove justice and what are kingdoms but gangs of criminals on a large scale”. Let us work and see that justice is not removed in this case!
Benjamin Collins, a public affairs analyst, writes from Lagos 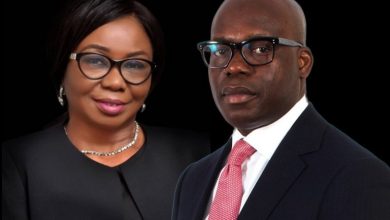